Medha, in Sanksrit, means to “make sacred”. Medha is also that part of the psyche that holds insights and values. Sumedhas is an institution that invites people to invest in processes that enhance insightfulness and the processes of valuing that which is enduring and human.

There is an inspiring story about Sumedhas in the Buddhist tradition. Sumedhas was a man of great wisdom and one who lived in great simplicity. He understood the nature of human beings, their struggles and sorrows deeply. He, therefore, had a profound appreciation of the Buddha. He heard one day that the Buddha of his time would be walking past his village on his final journey across the river of sorrow and Samsara. All the sentient beings whose emancipation he had waited for on this bank of the river would be journeying with the Buddha on his final walk. Sumedhas was overjoyed to hear this. He was very eager to catch a glimpse of the Buddha and convey to him how deeply Sumedhas appreciated the Buddha.

Even as he was walking towards the village, Sumedhas saw the Buddha and his co-travellers walking into the village. Sumedhas hurried along engrossed in the thought of how he could make a worthy offering to Buddha. All too soon, he saw Buddha walk towards him. “Since I am a man with no means, the only offering I can make is to ensure that one step of the Buddha’s journey is soft.” He was very sad that he would not be able to gaze upon Buddha’s compassionate eyes, yet lay himself down on the ground in Buddha’s path.

The step on his back did not come, and when Sumedhas lifted his head to ascertain what was happening, he heard Buddha speak to all gathered there. “All you people gathered here are twice blessed”, he heard Buddha say. “You are indeed fortunate to live at the time of my final journey to carry with me all the sentient beings who are ready to cross the river of sorrow. You are even more fortunate, for you are in the presence of the Buddha of the next Yuga. All of you who I will leave behind will be guided along the way by the Buddha of the next Yuga – The good Sumedhas who lies at my feet.”

So saying, Buddha helped Sumedhas to his feet, blessed him and went forward in his journey. Sumedhas lived through many lives and many transformations before he born as Gautama.

Our logo is a representation of a value we hold very dear. It represents a phenomenon that occurs in arithmetic, geometry, architecture and nature. We believe this phenomenon, somewhat mysterious, holds a truth as yet to be uncovered. However, it does give an inkling and points to another truth which we hold as a value.

The symbol that we have chosen for Sumedhas has as its motif the spiral. The spiral has symbolised the search for one’s spirit in all cultures : the Maoris of New Zealand, the aborigines of Australia, the Greeks, the natives of the Americas. The Kundalini Shakti is also symbolised by the spiral; as is the journey of the “Pilgrim’s Progress”.

The spiral form is generated from the framework of the Golden Section. The progression of rectangles accreted from the root square provides the structure, and the lyrical line of the spiral unfolds in perfect harmony with the Golden Section. The progression of the Golden Section called the “Fibonacci Series” is the pattern in which growth takes place. Leaves growing from the tender sprout follow the numbers in the series – 1, 2, 3, 5, 8, 13… -- in a spirally unfolding form. The nautilus shell is a perfect example of growth through accretion, following the mathematical precision of the spiral.

The symbol for Sumedhas also suggests a bird – the Hamsa, a very popular form in the Indian art, is based on the spiral motif; as is the Chakravaka. These birds symbolise a meditative mind. The Chakravaka is a mythical bird that lives by drinking moon beams; and the Hamsa is a lyrical form given to the movement of Prana.

The conch, symbolised by the spiral is the lyrical form of OM.

“Academe” was the name of the garden in Athens where philosophers would gather to engage on deep dialogue about the nature of the World, and of Man, where they would try and take a step towards discovering that which is true and enduring.

After covering the philosophical aspect, the logical aspect is presented in discrete form, in the way it has been recognised. Please go through the steps to reach the end. 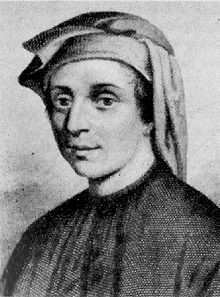 This series was created by Fibonacci and is named after him. 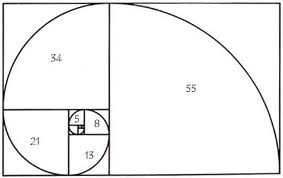 Construct a pentagon with all sides equal. Drop a perpendicular from the apex on to the base. Measure the length and compute DC/AF = 0.618034.

Draw a set of rectangles with varying dimensions, i.e. varying size of the sides. Show them to a set of people and ask each of your respondents to point out the one that is most “beautiful” in any sense. Surveys like this have shown that the rectangle which gets chosen most often, is one whose sides are closest to the ratio 0.618034.

Remarkably, enough, it is just the kind of spiral frequently found in the arrangements of seeds in flowers, in the shells of snails and other animals, and in certain cuts of marble. 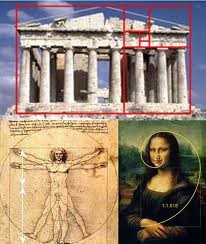 Take any line AC and find a point B on it.

Research studies have shown that this portion, the golden section as it is popularly known, has been used extensively in sculptures, paintings, architecture and even in furniture and type displays. The Greek architects used it extensively. 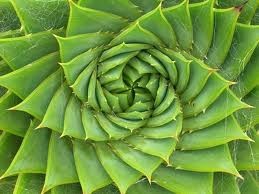 One of the best examples of the occurrence in nature of the ratio R is to be found in the head of a Sunflower.

The seeds are distributed over the head in spirals which radiate from the centre of the head to the outside edge, unwinding in both clockwise and counter clockwise directions. Detailed study of these spirals have resulted in the following conclusions :

Nobody knows why the ratio 0.618034 occurs in nature, nor why the objects proportioned by it are found to be aesthetically pleasing to human beings. Surely it is because we are a part of the nature itself. Yet the mystery remains.

The logo, if you take a close look is the spiral of the dynamic symmetry released by the rectangle as explained above. It is a symbol to constantly remind us that we are a part of nature, that we may explore the mysteries of nature, that we are not above it but may struggle to transcend its given level to a more insightful, meaningful and enlivening plane.